Stargardt’s disease, also known as juvenile muscular dystrophy, is an inherited eye condition that causes damage to the central vision. It is the most common cause of juvenile macular degeneration.

What Happens In Stargardt’s?

Stargardt’s causes damage to the macula of the eye, which is responsible for the central and detailed vision.

Out of the two photoreceptors - the rods in the outer retina, and the cones, in the macula, both usually die away in the condition. However, the cones, responsible for detailed vision, are most affected.

Since the macula of the eye, which is responsible for detailed and focused vision, is affected, people with Stargardt’s have difficulty performing tasks which involve focus. Some areas of difficulty may include reading, recognizing faces, watching television, and driving. In later stages, patients may also develop color blindness.

Your retina is examined after dilating your pupils. The condition is characterized by the appearance of excess lipofuscin in the form of yellowish specks surrounding the macula. These may or may not be accompanied by an oval lesion in the macular region.

Your optometrist may use the process of angiography, in which a dye is circulated through the blood vessels of the retina. If Stargardt’s is present, a dark area appears within the retinal tissue.

The condition is usually first noticed in childhood or adolescence, between 10 and 15 years of age. Stargardt’s is a progressive disease with differing rates of progression in different patients. Even in one individual, the rate of progression may vary at different stages of the disease. It may start with a gradual loss and progress faster after a stage.

The condition is almost always caused due to genetic reasons. A mutation of gene ABC4, acquired if both parents have one of it, has been found to be responsible for this disease. ABC4 is responsible for the production of a protein, which works to clear away the byproducts of Vitamin A in the photoreceptor cells. In this condition, cells without the ABC4 protein are unable to clear the byproducts. This causes a a build-up of a fatty substance, lipofuscin, which increases to damage the macular cells.

Treatment And Management of Stargardt’s

Using A Computer With Low Vision 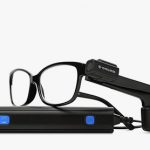 Unfortunately, there are no treatments for the disease. However, there are many visual aids and tools available for helping you make the maximum use of your remaining vision.

Low Vision rehabilitation programs aim to help and train patients to use methods and tools to see better.

Some helpful methods may include:

Research is underway in gene therapy and stem cells, and there is a hope of finding treatments in the future.